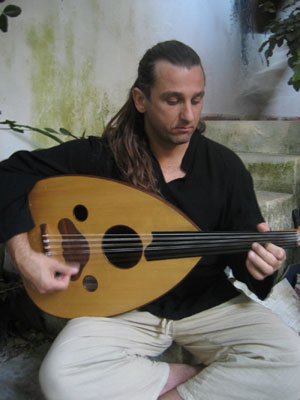 His interest in ancient, ethnic and traditional music has led him to progress in an endless pilgrimage through different musical instruments such as Rabel, Hurdy-gurdy and other instruments from the Iberian Peninsula tradition, or the Crwth Harp from the Welsh bardic tradition.

A more recent exciting discovery is Arabic, Turkish and Persian music under such illustrious teachers as Amin Chaachoo (Tetuan), and Oruç Guvenc and Necati Çelik (Istanbul) with whom he excels in the interpretation of the Oud.

In Istanbul he also began his training as an interpreter of Turkish Santur, Qanun Baglama and Saz with outstanding teachers such as Suhat Baktagir, Tarik Aydoglu and Osman Aksu.

This ongoing training has today led him to specialize in the interpretation and study of these and other instruments such as Rebec, Fiddle, Kemanja, Qanun, and Lute.